Mimosa tanning extract is derived from the bark of the Black Wattle tree, a species of Acacia native to Australia. The species was introduced to South Africa in the 1800’s and these rapidly growing trees were initially used as shelter-belts for stock and the wood for fuel and fencing. Later, it was discovered that the bark contained high levels of tannin which could be used for treating hides for leather production. This led to the tree being widely planted to produce tanning extract for the leather industry.

Black Wattle grows best in the cool, mistbelt section of South Africa along the eastern escarpment. The trees are grown in a 10-year cycle and managed in such a manner as to ensure that growers receive a regular income from their trees and that a regular supply of good quality wattle bark is available for processing at the wattle factories. 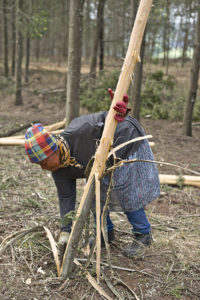 The wattle bark is tied in bundles ready for transport to the processing factory. The harvesting of bark is labour-intensive and generates much employment.